(1)
Is Steve Bannon the Second Most Powerful Man in the World?

There is only one President at a time, and Donald Trump is not one to cede authority. But in the early days at 1600 Pennsylvania, the portly and rumpled Bannon (the only male aide who dared to visit Trump's office without a suit and tie) has the tools to become as influential as any staffer in memory.
This Historical Theory Explains Steve Bannon's Apocalyptic Worldview
(2)
Kenneth Copeland: Christians Who Don't Vote For Trump Are 'Going To Be Guilty Of Murder'
(3)
How Trump won Evangelicals by a record 81 percent
(4)
WOW!!Kenneth Copeland Paula White and Other Pastors Shower Donald Trump with Prayers and Prophecy!
(5)
Here's What Happens AFTER THE RAPTURE Will Shake You To The Core! It's END TIMES

Jesus taught that He will return to earth the second time.

1. Will Jesus return to this earth the second time? Can we be positive?

Jesus said He will return to earth in the clouds.

2. In what manner will Jesus return the second time?

"While they beheld, he was taken up; and a cloud received him out of their sight. And while they looked steadfastly toward heaven as he went up, behold, two men stood by them in white apparel; Which also said, Ye men of Galilee, why stand ye gazing up into heaven? this same Jesus, which is taken up from you into heaven, shall so come in like manner as ye have seen him go into heaven." Acts 1:9-11.
Answer:   The Scriptures promise that Jesus will return to this earth in the same manner that He left at His ascension--in a visible, literal, bodily, personal manner. Matthew 24:30 says, "They shall see the Son of man coming in the clouds of heaven with power and great glory." He will come in the clouds literally, as a personal being with a body of flesh and bones (Luke 24:36-43, 50, 51), and His coming will be visible. Scripture is clear on these facts.

Every person living on earth will see Jesus when He returns the second time.

3. Will the second coming of Christ be visible to all men or only to a select group?

"Behold, he cometh with clouds; and every eye shall see him." Revelation 1:7. "For as the lightning cometh out of the east, and shineth even unto the west; so shall also the coming of the Son of man be." Matthew 24:27.
Answer:   Every man, woman, and child living in the world when Jesus returns will see Him at His second coming. The staggering threefold (Luke 9:26) brightness of His coming will stretch from horizon to horizon, and the atmosphere will be charged with brilliant glory like lightning. No one will be able to hide. Every living soul will be forced to face Christ. Christ left no loophole for doubt or misunderstanding.Note: The secret rapture so commonly believed and taught today is not in the Bible. It is a human invention. Nor is the second coming a spiritual coming into the heart at conversion. It does not take place at a man's death, nor is it figurative, to be manifested by better world conditions. These theories are all of human origin. The second coming will be a literal, worldwide, visible, personal appearance of Christ in the clouds to bring this world to an end and to reward or punish all men and women. 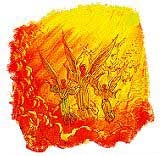 All the angels of heaven will be with Jesus at His second coming.

4. Who will come with Jesus at His second coming, and why?

"When the Son of man shall come in his glory, and all the holy angels with him, then shall he sit upon the throne of his glory." Matthew 25:31.
Answer:   All the angels of heaven will come with Jesus at His second coming. As the cloud nears the earth, Jesus will send His angels, and they will quickly gather together all of the righteous people in preparation for the trip back to heaven (Matthew 24:31).

Jesus will take His people to heaven and restore to them everything Adam and Eve lost.

5. What is the purpose of Jesus' second coming to this earth?

"And, behold, I come quickly; and my reward is with me, to give every man according as his work shall be." Revelation 22:12. "I will come again, and receive you unto myself; that where I am, there ye may be also." John 14:3."And he shall send Jesus Christ ... Whom the heaven must receive until the times of restitution of all things." Acts 3:20, 21.
Answer:   Jesus is coming back to this earth to reward His people as He promised and to take them to the beautiful home He has prepared for them. He will restore to His people all of the joys and glories of Eden that Adam and Eve lost by sinning. His second coming will bring an end to this present age of evil.

Little babies taken from their parents by death will be returned to them at Jesus' second coming.

6. What will happen to the righteous people when Jesus comes the second time?

"For the Lord himself shall descend from heaven ... and the dead in Christ shall rise first: Then we which are alive and remain shall be caught up together with them in the clouds, to meet the Lord in the air: and so shall we ever be with the Lord." 1 Thessalonians 4:16, 17. "We shall all be changed, ... and the dead shall be raised incorruptible. For ... this mortal must put on immortality." 1 Corinthians 15:51-53. "We look for ... the Lord Jesus Christ: Who shall change our vile body, that it may be fashioned like unto his glorious body." Philippians 3:20, 21.
Answer:   The righteous dead will be raised from their graves, given perfect, immortal bodies like that of Christ, and caught up into the clouds to meet the Lord. Then the righteous living will also be given bodies like Christ and will be caught up to meet the Lord in the air. And Jesus will take the righteous to heaven with Him. Note that Jesus does not touch the earth at His second coming. The saints meet Him "in the air." So God's people will ignore any report that Christ is in Baltimore, New Orleans, Los Angeles, etc. False christs will appear and do miracles on the earth (Matthew 24:23-27), but Jesus will remain in the clouds above the earth at His second coming. 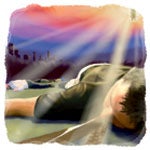 The wicked will be slain at Jesus' second coming.

7. What will happen to the wicked people when Jesus comes again?

"With the breath of his lips shall he slay the wicked." Isaiah 11:4. "And the slain of the Lord shall be at that day from one end of the earth even unto the other end of the earth." Jeremiah 25:33.
Answer:   The wicked will be slain by Jesus.

Today's earthquakes are minor in comparison with the massive earthquake at Jesus' coming.

8. How will Christ's second coming affect the earth itself?

"And there was a great earthquake, such as was not since men were upon the earth, so mighty an earthquake, and so great." "And every island fled away, and the mountains were not found." Revelation 16:18, 20. "I beheld, and, lo, the fruitful place was a wilderness, and all the cities thereof were broken down at the presence of the Lord." Jeremiah 4:26. "The Lord maketh the earth empty, and maketh it waste." "The land shall be utterly emptied." Isaiah 24:1, 3.
Answer:   The earth will be seized by a great earthquake at the coming of the Lord. This earthquake will be of such a devastating nature that it will leave the world in a state of total destruction.

Millions of Christians died during the Dark Ages. Many were burned at the stake.

9. Does the Bible give specific information regarding the nearness of Christ's second coming? 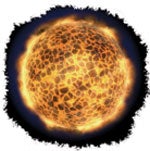 Hell will be the entire world on fire. It will be 25,000 miles in circumference--its heat so great that everything on earth will be "burned up".
Revelation 20:1-10:
And I saw an angel coming down out of heaven, having the key to the Abyss and holding in his hand a great  chain. He seized the dragon, that ancient serpent, who is the devil, or Satan, and bound him for a thousand years. He threw him into the Abyss, and locked and sealed it over him, to keep him from deceiving the nations anymore until the thousand years were ended. After that, he must be set free for a short time. I saw thrones on which were seated those who had been given authority to judge. And I saw the souls of those who had been beheaded because of their testimony about Jesus and because of the word of God. They had not worshiped the beast or its image and had not received its mark on their foreheads or their hands. They came to life and reigned with Christ a thousand years. The rest of the dead did not come to life until the thousand years were ended. This is the first resurrection.Blessed and holy are those who share in the first resurrection. The second death has no power over them, but they will be priests of God and of Christ and will reign with him for a thousand years. When the thousand years are over, Satan will be released from his prison  and will go out to deceive the nations in the four corners of the earth—Gog and Magog—and to gather them for battle. In number they are like the sand on the seashore. They marched across the breadth of the earth and surrounded the camp of God's people, the city he loves. But fire came down from heaven and devoured them. And the devil, who deceived them, was thrown into the lake of burning sulfur, where the beast and the false prophet had been thrown. They will be tormented day and night for ever and ever.
THE PROPHETIC WEEK = 6,000 years for sin to run its course  + 1,000 years Satan is bound and then he and all sinners are destroyed= 7,000 years.
WHEN DID JESUS COME TO EARTH AS A BABY?
But Jesus accepted humanity when the race had been weakened by four thousand years of sin. Like every     child of Adam He accepted the results of the working of the great law of heredity. What these results were is shown     in the history of His earthly ancestors. He came with such a heredity to share our sorrows and temptations, and to     give us the example of a sinless life. Desire of Ages p. 48
Jesus Birth Year: 4B.C. 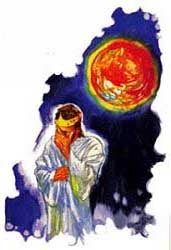 Jesus will be deeply saddened when He must destroy those whom He died to save.
Adding 2,000 years to Jesus Birth in 4 B.C, comes to 1997.
Why didn't Jesus come around 1997?
Answer:
2 Peter 3:9
The Lord is not slow in keeping his promise, as some understand slowness. Instead He is patient with you, not wanting anyone to perish, but everyone to come to repentance.
Matthew 25:1-10
"At that time the kingdom of heaven will be like ten virgins who took their lamps and went out to meet the bridegroom. Five of them were foolish and five were wise. The foolish ones took their lamps but did not take any oil with them. The wise ones, however, took oil in jars along with their lamps. The bridegroom was a long time in coming, and they all became drowsy and fell asleep. "At midnight the cry rang out: 'Here's the bridegroom! Come out to meet him!'"Then all the virgins woke up and trimmed their lamps. The foolish ones said to the wise, 'Give us some of your oil; our lamps are going out. No, they replied, 'there may not be enough for both us and you. Instead, go to those who sell oil and buy some for yourselves.' But while they were on their way to buy the oil, the bridegroom arrived. The virgins who were ready went in with him to the wedding banquet. And the door was shut.
Log in | Register